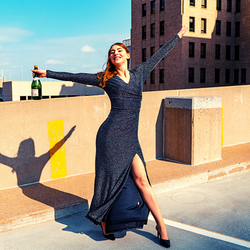 2021. This year I have come full circle. I know that I seem like a tough chick but not so long ago, I was not. I had given my personal power to the wrong man, "Voldemort," who gaslighted me into thinking that physical and financial abuse were actually acts of love. The fog of abuse was thick but, in my heart, I knew something was wrong.

Everything came into sharp focus when Voldemort snapped after a long night of drinking. His eyes went black as he threw me to the ground and brutally placed his strong fingers around my neck, began squeezing the life from me. He was violent and out of control before but this was a new level of alcoholic rage. Most domestic violence murders involve alcohol and I was not interested in becoming a statistic. Until then, I had made excuses for him and bent over backwards to appease him but when you are in the wrong relationship, you are in the wrong relationship. So I began planning my escape.

But leaving him was incredibly hard. We were together for a decade and I had bright dreams of a future together. When Voldemort choose to control his behavior and drinking, he was a charismatic mechanical engineer who was loved by all but it was all a façade. Voldemort wore many masks and would transform himself into what you wanted to get what he wanted. It was psychological torture. One moment he was kind and the next, unbelievably cruel. As time went on and I became wise to his ways, Voldemort's psychological machinations lost their power.

I learned that my "Mrs. Fix-It" attitude was enabling his toxic behavior as I would solve each of his problems and leave him free to create more. I had mistakenly believed that it was my responsibility to manage his emotions at the expense of my own. My responsibility was to myself and build a future I could be proud of. This was the first major life event of my own that I faced absolutely alone. Before I had always had my Papa to fall back on but after his stroke, it was all up to me to figure out. I was terrified of what the future would look like solo but knew that it was better than staying with Voldemort.

The fear felt unsurmountable but I worked my way through it. A big part of my fear was the financial unknown. I have always been an earner and independent, but there were so many unknown variables that I felt frozen. I needed to get out before Voldemort called the Death Eaters and realized the best way to have this difficult discussion with him was through a financial report that modeled different divorce outcomes. In what would become the first Divorce Impact Analysis report, I defined the undefined and instantly my problems became manageable.

As I sat down with my calculator to determine my post-divorce living expenses, I had a sudden lightness and realized that cloud of dread was gone! My fear was literally replaced by the financial facts. Through financial analysis and a deep belief that the future would be better, I empowered myself to leave. The psychological prison Voldemort painstakingly built was destroyed and I was free.

My freedom was hard won and there are countless others who face situations like mine. Even in good circumstances, divorce is hard. Almost every component of life changes which made me frozen in fear. It was only when I had the divorce plan in place that I felt empowered to take action. It dawned on me that I could turn this painful experience into something greater and DivorceAnalytics.com was born.

From my father's stroke to Voldemort's abuse and a whole lot in between, I have faced hard life events at a young age. I have felt the pain of life and refuse to be broken by it. There have been times when I cried myself to sleep but I have always arisen the next day to fight for my future. I left Voldemort right in the middle of a career change and was determined to become a personal finance expert. Bringing my dreams into life, I passed the Series 65, Series 66, Series 7, and the SIE back to back to back to back. The sticky notes that covered my house acted as a study tool but really they served as a visual reminder of the promise I made myself.

For as long as I could remember, I have been obsessed with understanding how money works. Money can be used as a tool or a drug. When I have wielded money as tool, it has enabled me to breath life into my ideas and empowered me to live a life worth meaning. When money has been used as a drug, it is a symptom of bigger problems in my life. Money evokes so many different emotions that having an emotional regulation built into money management is a must.

As we head into 2022, I am reinvigorated by my mission of financial empowerment. I am excited for the many, many projects I have coming up and am thrilled to evolving as a businesswoman. I know I work hard but it blows my mind to see what these energetic hands have created. I am humbled and honored to have come this far and eager to see what the future brings.

If you would like help replacing fears with facts, email me at hello@mywealthanalytics.com.

If you are facing intimate partner abuse, please check out www.thehotline.org for resources and support.

Divorce Analytics provides non-legal divorce financial planning. This is not investment advice and is for general education purposes.